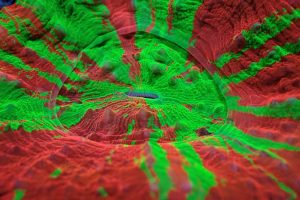 Corals are saltwater/marine invertebrates that are sometimes solitary but generally live in groups or colonies of compact identical polyps (Tiny Animals that resemble an upside down jellyfish).

Polyps can range in size from a few millimetres to many centimetres in length/width and often have a set of mobile tentacles serving a central mouth in order to feed.