Aquarium fish keeping is very popular in Australia, with an estimated 60% of households having pet fish. It is expected that the number of people keeping fish in Australia will continue to grow; this is due to the fact that fish are a convenient pet for small houses and apartments and due to the increasing popularity of marine and nano aquaria. Additionally, it has recently been shown that keeping fish can lower your blood pressure and your heart rate! 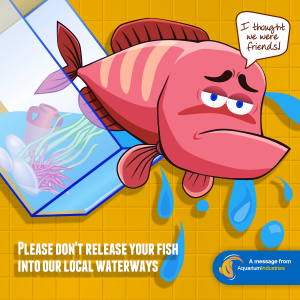 As a responsible pet owner, it is important to remember that should you decide you no longer want your pet fish, to never release your unwanted live (or dead) fish into the environment – even if your pet fish is a species native to Australia, download your caresheet here.

Releasing aquarium fish into a local waterway* usually condemns them to a nasty death due to predators, or even starvation as the pet fish is not used to fending for itself. Unfortunately in some cases such releases can even lead to the fish becoming established as an introduced pest.

Fish can enter our local environment by either unintentional or intentional releasing:-

Unintentional release is less common and is usually a result of the fish escaping from their pond during a flood or storm event.

Intentional release is more common and occurs when the fish is removed from their tank or pond and deliberately released into the environment. Reasons that people intentionally release their fish include the fish becoming too big for its tank, the owner is moving house, or simply the owner no longer wants to keep their pet fish. Additionally, some cultures believe that releasing fish into the environment is a way of ‘making merit’ as they are liberating life. There is also evidence that recreational anglers have used ‘aquarium’ fish as bait (then dumped their unused “live bait”, and some fishers have intentionally released fish to stock their local dam, which in turn has escaped into adjoining waterways. Anyone stocking natural waterways including dams should first contact their local authority.

No matter the reason, please remember that aquarium fish (dead or alive) should never be released into the environment because:
All fish have specific water quality requirements (temperature, pH, water hardness etc) and the water that you release your fish into might not be ideal for your pre-loved fish. Therefore it is very likely that even though you think you are doing the right thing for your fish, you may actually be doing them harm.

So if you no longer want your fish, try selling it or giving it away to family and friends who already have fish or contact your local fish shop as they may be willing to take it from you. If your fish is sick, we recommend firstly checking that the water quality parameters match the fishes requirements or visit your local pet shop who can help you with your fish. If your fish dies, give it a nice burial in your backyard or dispose of it in the rubbish bin – never dump them into a waterway.

*Local waterways include creeks, rivers, lakes, dams, ponds, the ocean or any other body of water.